What else to see

We admit, we do not lie in the centre of Copenhagen. However there is easy acces to the museum with bus 1A or S-train A til Avedøre Station. But what can else see in the area, when you have travelled to the suburb?

Well the area the museum lies in is an experience in itself. It is an old military barrack called Avedørelejren. It was build between 1911-1913, but today it consits of different forms of housing, creative companies, a hostel and more. The most well known company in the area is the film company Zentropa which most famous director is Lars von Trier. Besides that there are a lot of green areas were you can enjoy your picninc.

1 km from the museum lies the Western Rampart a fortification build from 1888-1892. The fortification was staffed during 1. WW. Denmark did not participate, but feared the war would spread. Today you can discover the fortification on your own with its moat, bunkers and rampart. Today it is very peacefull and a great place for a picnic as well.

If you continue on the S train A you can enjoy the beach at Køge Bugt Strand Park or Arken the museum of modern art, that lies in Ishøj.

Every Sunday you can try out everything from juggling to trapeze at Circus Fun. Circus Fun takes place at 10.15 … Continue reading → 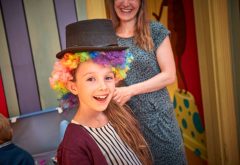 From the 1th July and every opening day in July we offer joyfull experiences for the entire family. The museum … Continue reading →